Wisconsin families, workers, and potential workers should be able to support themselves and fully participate in their communities. To help that happen, lawmakers should tear down barriers to driver licenses that make it difficult or impossible for some immigrants and people struggling to make ends meet to get driver licenses.

Having a driver license can be the determining factor in whether a person can get and keep a job. Having a license also helps people get to the doctor’s office, to their children’s parent-teacher conferences, to the grocery store, and to church. A valid driver license is especially important for residents who live in areas that lack public transportation.

1. Stop the practice of suspending driver licenses for reasons unrelated to dangerous driving.

Wisconsin courts regularly suspend the licenses of people who can’t afford to pay fines for minor violations like having a burnt-out headlight, or parking in the wrong spot. In 2019 alone, the state suspended nearly 200,000 licenses for nonpayment of tickets, making debt collection the main reason licenses were suspended.

When the state suspends a person’s license for not paying a traffic or non-traffic ticket, that person suffers a consequence far out of proportion to the original infraction, especially since being able to legally drive a car can be the determining factor in finding a job. Black drivers are far more likely to bear the brunt of this misguided policy than White drivers, with Black men seven times as likely as White men to have their licenses suspended for debt collection, according to the UW-Milwaukee Employment and Training Institute.

In addition to having their licenses suspended, Wisconsin drivers who miss paying a ticket are sometimes incarcerated for nonpayment. During a recent 5-year period, 9,277 individuals served time in jail for nonpayment in Milwaukee County alone. Incarcerating individuals who are unable to make payments is a cruel and counterproductive policy that harms many families and hurts the workforce by giving many workers a permanent record of arrest and incarceration that poses a significant barrier to finding future employment.

The state has more effective debt collection tools it could use that are less likely to make someone lose their job, including approaches like requiring community service, making affordable payment arrangements, and intercepting tax refunds. The state should stop suspending licenses for nonpayment of fines, and switch to more constructive means of collecting debt.

The lack of affordable driver education disproportionately harms Black youth. Only 17% of Black male teens ages 16 and 17 in Milwaukee have a license, compared to 64% of White male teens in Milwaukee County suburbs, according to the Employment and Training Institute. Research has shown that when looking for steady work, having a license can be even more important than having a high school diploma.

‍3. Allow all immigrants to get driver licenses without regard to immigration status.

In Wisconsin, the state bars immigrants who are undocumented from getting a driver license, regardless of how long they have lived in the state.

Sixteen other states issue licenses to undocumented immigrants. In those states, children, families, and communities benefit from expanded access to opportunity.

In Wisconsin, an estimated 32,000 residents who are undocumented would get licenses if barriers were removed. That figure includes 14,000 parents who would be better able to provide for their children’s needs. Insurance companies would gain millions in revenue, and already-insured drivers across the state would save an estimated $16 million a year in insurance premiums due to the reduction in the number of uninsured drivers.

Reducing barriers to driver licenses would bring broad-based benefits to Wisconsin’s economy and boost families, communities, and businesses across the state. Wisconsin lawmakers should take steps to remove obstacles that block access to licenses as well as to economic opportunity. 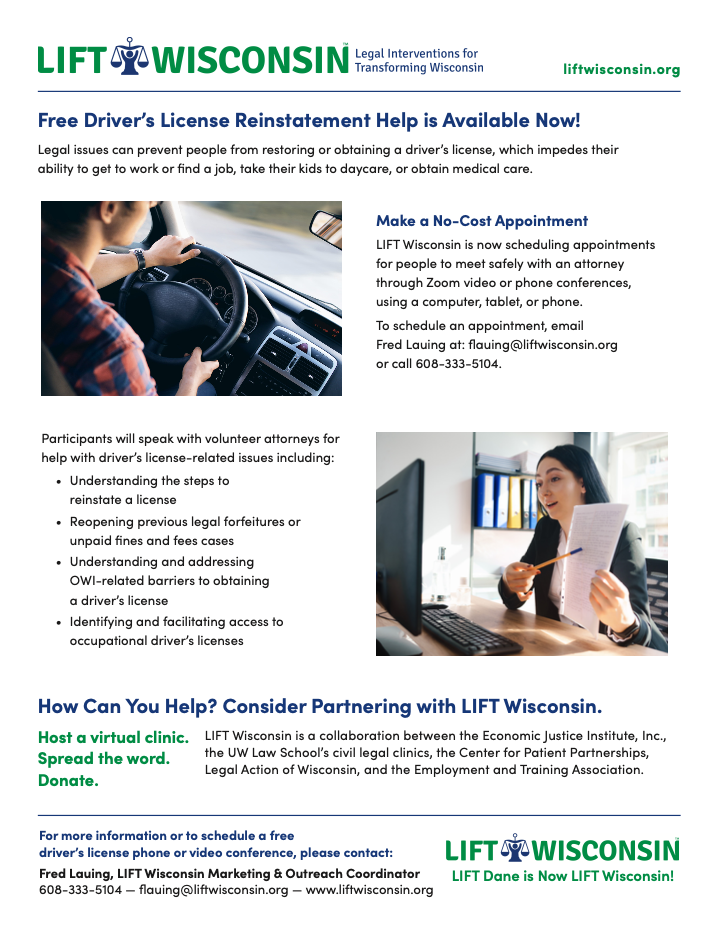